Daniel "Danielle" Stopframe is Orel's gym teacher, and the biological father of Shapey.

Orel's school gym teacher, Daniel (pronounced "Danielle") Stopframe is a blond, mustachioed, effeminate, soft-spoken and rather self-absorbed bisexual man who is obsessed with Orel's father, Clay. His obsession led to the Coach having a brief affair with Orel's mother, Bloberta, whom he impregnated with her second child, Shapey.

Unlike the rest of the town's residents, Coach Stopframe is portrayed as a rather nihilistic figure within the community. He has been shown to be willing to pray to both God and Satan in order to get what he wants, including engaging in Satanic rituals in an attempt to make the track team run faster. Indeed, he often keeps his personal crucifix on his wall tilted on its side, to demonstrate his flexibility regarding his religious beliefs.

As a bisexual, Stopframe is shown to be indiscriminate in his sexual practices. Besides having sex with Bloberta (whom he later rejected when she tried to resume their affair), and openly lusting after Clay Puppington, the Coach is once seen with three women and a dog. Stopframe is also a fan of gothic erotica.

In "Honor " Daniel shows himself to be a very competent parent figure to Orel, including buying him hot chocolate, teaching him to ice-skate without his crutch and even decorating a Christmas tree. In an insightful moment, Daniel tells a despondent Orel that if Clay has anything worth honoring, it's the fact that he created Orel. Near the end, when Clay (through Orel) finally admits his feelings for Daniel, he coldly refuses him, having finally realized how shallow and pathetic Clay really is. Before leaving, Daniel paternally looks at Orel and tells him he enjoyed their time together. The bear that Orel shot in "Nature" then comes into his possession, representing full circle rather of the man that Clay failed to be, and the fulfillment of Orel succeeding his father in all aspects.

Its not known what would have become of Daniel in the future or in the series. Its not known if his time with Orel would have reawakening his paternal feelings or if he'd try to reconnect with his son.

Coach Stopframe first appears in the beginning of Beforel Orel, having sex with Bloberta, during which it's very clear that Stopframe was merely using her as he yells out Clay's name throughout. Afterwards, he quickly leaves stealing a photo of Clay from Bloberta. Though she has no idea why, he leaves, very confident he got Bloberta pregnant. Something that shocks her when she hears him compliment how Orel will be a good brother.

Afterwards, he pretty much has nothing to do with Bloberta. He is shown to have known about Shapey, as right after his birth, he introduces himself to Clay at the bar. He hands him a pink cigar, Clay (who has no idea he slept with Bloberta) asks if he had a girl. Stopframe answers it vaguely. It hints that Stopframe only got Bloberta pregnant as an excuse to try and get closer to Clay. It is possible that it's how he originally met Clay, as Clay showed no real signs of knowing him.

Has been in love with with Clay ever since the very first episode. He stalks and obsesses over Clay, having many photos of him and the two of them together hanging in his house. In Satan, Stopframe tries to use Satanism as a way to win Clay's love. Clay returns his feelings in very subtle, subconcious ways, but in the end always rejects Stopframe, not completly aware of his own actions, or of Stopframe's real feelings. Stopframe continues his lust for Clay for a year, until witnessing Clay making out with Ms. Censordoll. In Honor, Stopframe realizes through spending time with Orel just what a dishonorable person Clay is, and Clay's confession of his love to Stopframe later in the episode comes all too late.

Once had an affair with her and impregnated her with her second son, Shapey. However it is revealed in Numb that he used Bloberta in order to get closer to Clay. He at first apologizes but then admits he doesn't care about her feelings and has a laugh about it.

Shapey is Stopframe's biological son, but has no emotional bond or connection with whatsoever. In Loyalty, Shapey gives Stopframe a hug. It is the only time we see the two of them together. Shapey could know his father, but there's been no further evidence of it as Shapey has a short attention span. Stopframe's never really attemped to bond with his son.

Stopframe considers Orel one of his best athletic students. Sometimes, he uses Orel as a way to check up on Clay. In Satan, he asks Orel to obtain some of Clay's hair for use in a love ritual, and ends up bringing Orel to said ritual as a "virgin sacrifice". In Honor, the two bond through a day together having winter fun, and through conversations about Clay's actions against Orel (such as being shot by him in Nature Part 2.) It shows Stopframe what a pathetic person Clay is and what a good person Orel is.

The Lord's Greatest Gift- He waits in line, behind Clay, to urinate on the wall.

Waste- Tells the kids to start drinking Orel's new "Health Shake". He also writes a 12pg letter to Clay, this being the first hint of their relationship.

The Best Christmas Ever- He cheers Clay up at Forghetty's over his ordeals currently happening. He also puts his hand on Clay's buttocks.

God's Image- Sets fire to the Figurelli home with a Molotov cocktail.

Satan- Attends a satanic love ritual with Orel, in hopes to get with Clay.

Orel's Movie Premiere- Attends Orel's premiere; he seems to be the only one that doesn't get mocked.

Numb- Bloberta tries to have an affair with him again, but he doesn't want to, giving a hint of why they had an affair in the first place.

Innocence- Gives Orel the idea of bathing in virgin blood to help him stay young.

Nesting- He and Clay are about to kiss just when Ms Censordoll enters. Leads into the next episode.

Honor- He witnesses Clay and Censordoll making out and he holds a cold grudge on Clay. He spends Christmas with Orel, acting as the only father figure in his life, until Clay interuppts and confesses his love for Daniel in front of his own family.

Rejecting her offer for another affair 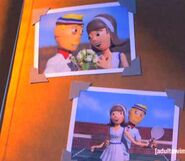 Daniel's past affair with Bloberta

Admits he had fun spending time with Orel 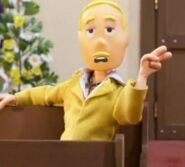 Listening to the adults in "Innocence"
Add a photo to this gallery
Retrieved from "https://moralorel.fandom.com/wiki/Daniel_Stopframe?oldid=14135"
Community content is available under CC-BY-SA unless otherwise noted.