Doughy Latchkey (born March 9, 1983) is Orel's best friend, and is the son of Karl Latchkey and Kim Latchkey. He and Orel have been best friends since they were toddlers, and he is always helpful towards Orel.

Doughy is very naive and a bit shy, but he is nice, kind-hearted, and deeply cares about his friends, especially Orel, but unlike Orel, he is very sensitive, easily frightened, not very bright, and less enthusiastic. He has never been seen without his rainbow beanie, and has rapid mood swings from despondent to cheerful. As a result, he is often indecisive, lacks self-confidence, and consistently fails to stand up for himself when pressed, such as by letting Orel and Joe throw rocks at his dad's car, or failing to stand up for Orel in confronting the school bully, Walt Gluegun. He is also the original "Summer Smith".

Doughy may not be as confident or bright as Orel, but he shown to be a bit more reasonable than he is as he tries to talk him out of his ideas most of the time. He also has a strange gift of smelling sexual intercourse from a mile away.

In the episode "Courtship", Doughy's home life was revealed. His parents is a red-headed (stereotypical) jock father and a blonde (stereotypical) cheerleader mother who act like immature teenagers (most likely it's possible they had him young). Orel seems to be the only one who notices the difference between how his own parents treat him and how Doughy is treated by his parents. He points out that Doughy's parents never call him "son" or show him love and affection. In "Trigger", it was revealed that he has a gift for marksmanship, evidently stemming from his belief that he and his actions don't matter. He tried to ursup Orel's place in the family, only to be manipulated by Clay to get Orel to shoot better and was ignored by Clay soon after this. In "Honor", Doughy was last seen getting hurt in Hurtball.

He also appears in the lost episode, "Abstinence" which marks his second major appearance besides "Trigger". After unintentionally ruining people's fun, his father, Karl Latchkey, winds up giving him a job working graveyard shift at the town's farm. This later prompts Doughy to become a professional mood spoiler in Moralton.

Doughy's featured in the special "Beforel Orel" depicting Orel's beginnings. Young Doughy meets and befriends Orel Puppington, Tommy, and The Other Guy. At first, the group is very warming to one another and take a liking to Orel. But due to bad parenting, Orel's very naive and too trusting. When Orel falls and hurts himself, the trio realize how easily manipulated he is when they convince him that he didn't hurt himself. Doughy and the boys unintentionally become something of bullies to Orel. Doughy appears to be the only one who isn't fond of the tricks as he doesn't laugh when the others call him names or get him to hurt himself.

Orel's brought back from his grandfather's to meet his new baby brother and to be taught about God. However, he's left greatly confused due to Reverend Putty's, Miss Censordoll's, and Clay Puppington's bad teachings. Orel is taught to believe he must show his faith, like in the story of Abraham and Isaac. This doesn't help much when Doughy and the other kids go along and encourage him to follow along with the story.

Orel is stopped just in time by his grandfather and Officer Papermouth. But Doughy's injured during this, as its shown the knife hit him in the forehead.

Doughy has a round face, short red hair, wears a white shirt with a red tie, dark brown khakis, and a rainbow helicopter beanie on his head.

The Lord's Greatest Gift - He helps Orel raise the dead. After misinterpreting Reverend Putty's sermon, he tells Doughy that dead people are spitting in God's face by being dead after they visit the graveyard. They find the grave of Doughy's dead grandfather and Doughy remarks his grandfather would never spit in God's face.

Orel comes up with a plan to revive Doughy's grandfather and other dead people by necromancy. Doughy, however is hesitant to the idea since he doesn't think the idea is good. He is then convinced by Orel when he told him his grandfather can buy him ice cream again if they bring him back to life.

God-Fearing - At the beginning of the episode, he asks officer papermouth if being a police man is scary or not. He and his other friends dress up as angles for Halloween. He also advises Orel against breaking all ten commandments when he told him he has to do so in order to become scared. When Orel decides to break all ten commandments, he made Tommy and Doughy fight over Tommy's toy.

Maturity - He and Orel sneak into a bar to observe adults. He also questions why Principal fakey and nurse bendy are together after seeing them together. Orel then tells him that he shouldn't question adults. He and Orel then leave the bar after Doughy grows uncomfortable.

Loyalty - Doughy and his friends worry about Orel's new friend Joe. At one point Joe and Orel throw rocks at Doughy's dad's car which Doughy tells them not to do so, surprisingly not bothered by it a bit. Then they go and tell Clay about what Orel is doing. Doughy along with his other friends tell Clay it's hard to talk about which makes clay to teach them his own method of talking about something that bothers him: by drinking heavily.

Few moments later, Doughy and his other friends have become completely drunk. Doughy shows concern about Clay wanting to punish Orel, which Clay's response is that "God wants people to beat their kids."

Doughy asks why but Clay answers it vaguely. After Clay leaves, Doughy expresses how much he wished Clay was his dad, which his other friends agree.

God's Chef - Hangs out and helps Orel throughout almost the entire episode.

God's Image - Doughy and the other kids realize that Billy has a different skin color than them.

Love - Doughy worries that Orel will go to hell for loving his pet dog more than Jesus.

Praying - Doughy is sad that Orel has to spend all his time praying instead of hanging out with him.

Turn The Other Cheek - Orel saves Doughy from getting beat up by Walt, but later beats Doughy up because he makes a fist (they were playing rock paper scissors).

Courtship - Doughy falls in love with his teacher, Ms. Sculptham, and buys her romantic gifts. He even takes her to Paris, France.

Orel convinces him to trick Cecil Creepler into buying him presents so he can give them to his teacher.

Presents For God - Orel and Doughy visit Sinville to find “sinners” for Reverend Putty to save. They later (unknowingly) get more prostitute women from Sinville to have sex with men in Moralton.

Grounded - Doughy helps Orel repeatedly kill himself so he can talk to God, but regrets it when he is afraid that Orel might not come back to life.

Innocence - Along with Tommy, Billy Figurelli and Marionetta, Doughy bathe Orel in virgin blood so he can remain young and innocent.

Trigger - Doughy tries to make it so Orel can't go on his hunting trip with Clay, so that he'll take him instead.

Honor - Doughy complains to Coach Stopframe about having to play "Hurtball"

Beforel Orel - Doughy meets and befriends Orel in this special.

Doughy's first major in the series. He tries to help people around the town, only to become a "cock-blocker" unintentionally. This then leads to ms Censordoll hiring him as one to prevent townspeople from love making after he loses his job at the town's farm. 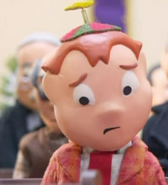 Doughy in his Sunday suit

Doughy in his scouts uniform

A young Doughy listening to Tommy play a trick on Orel 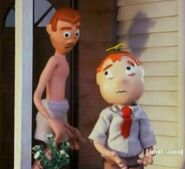 Doughy is sad that his Dad forgot him

Doughy's date at the Arms-Length Dance

Karl and Doughy in "Abstinence"

Doughy trying to talk to his father.

Doughy with his friends, ready to sacrifice Shapey in "Beforel Orel"
Add a photo to this gallery
Retrieved from "https://moralorel.fandom.com/wiki/Doughy_Latchkey?oldid=14130"
Community content is available under CC-BY-SA unless otherwise noted.