Ursula Bendy is a nurse at the Dr. Martin Luther's Protestant Hospital, and is also the school nurse at Alfred G. Diorama Elementary School.

Though apparently a registered nurse, Nurse Bendy is very inattentive and lacks even rudimentary medical knowledge, exemplified in the episode "Grounded" when, after an unconscious Orel opens his eyes, she says, "At least his eyes are alive." She also seems generally dimwitted (or at least uninterested), prompting the doctors to frequently order her to "sit outside and look pretty," though this may just be an example of Moralton's rampant misogyny.

In most episodes, Nurse Bendy seems to be air-headed, cold, and uninterested in her job and the people around her. She is having an affair with Principal Fakey, though she seems completely uninterested in him and expresses no pleasure—or even acknowledgment—when they have sex. By season 3, her personal life and true emotions are revealed.

In the episode Alone, she is revealed possibly to be suffering from paranoid delusions and is mentally disturbed. Only in her late 20s, she regresses to a childlike state at home. She plays house with her teddy bears and calls them her "family", acting out her fantasy of being a loving mother in a stable relationship. She does this because she suffers from incredible loneliness and isolation. She is afraid that people only care about her for "dirty, awful things" (referring to sex), and wants someone who recognizes that she is "a real person" and feels sad and afraid in addition to "happy thoughts".

She has a psychotic breakdown when she knocks her "hubby" onto herself while cleaning up some mustard. She begins screaming, believing that he too is attempting to have sex with her. He then falls over, knocking some milk onto her, vaguely resembling semen. Her story in "Alone" ends with her sobbing in the corner, believing now that even he wants her for sex, like every other man in her life.

In "Dumb", it's revealed that the school bully, Joe Secondopinionson, is her son, whom she was forced to give up at the young age of 13 (possibly the reason why she regresses to a childlike state away from the public eye.). After a surprisingly touching sequence where she and Joe bond, she throws her stuffed teddy bear "Sonny" in the trash, no longer needing the childish fantasy substitute now that she has her real son. She is a loving, kind, and nurturing mother to Joe, and he appreciates her love and affection.

It is heavily implied that she was forced to move out because of Joe; Dr. Secondopinionson either wanted her gone or thought it'd be best if he tend to Joe until she was mature enough to raise him. Her general fear of the father figure and fear of sex stems from the implication that she was molested by her adoptive father as a child. This also may be the cause of her delusions. 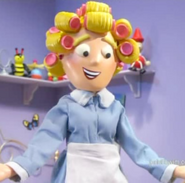 Shocked that Orel claims to have seen Heaven 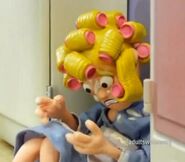 Bendy's break down in "Alone" 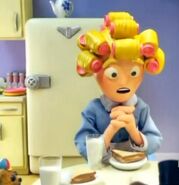 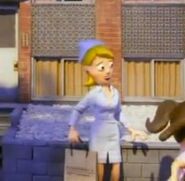 Smiling at kids passing her 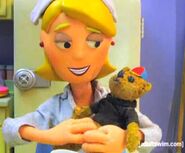 Joe meets his mom in "Dumb"

Having a tea party with her "family"

Nurse Bendy and her son Joe

Nurse Bendy ice skating with her son, Joe.
Add a photo to this gallery
Retrieved from "https://moralorel.fandom.com/wiki/Nurse_Bendy?oldid=14271"
Community content is available under CC-BY-SA unless otherwise noted.