Shapey Puppington is Orel's 7-year-old half-brother and Joe's cousin. He is a misbehaving, spoiled, impulsive, and emotionally stunted little boy who does nothing but yell, complain, and act out. He behaves more like a toddler, than his actual age. His parents do nothing to stop his out-of-control behavior, preferring to let him have what he wants so he'll stay quiet (they don't want their neighbors thinking they're bad parents, but Shapey's behavior is proof and not disciplining him makes them bad parents). On a minor note, due to being treated like a spoiled baby by his parents, he is also still breastfed. It is first indicated in "The Best Christmas Ever " that he is an illegitimate child. His biological father is conclusively revealed in "Numb " to be Coach Stopframe , who had only formed a relationship with Bloberta to get closer to Clay, although in "Love " Clay gets a picture of Coach Stopframe and compares it with a picture of Shapey.

In the season two episode "The Lord's Prayer", Shapey is accidentally switched with the oddly similar Block Posabule, the son of the Puppingtons' new neighbors. The main difference between the two is their hair color (Block is a redhead, while Shapey is blond) and head shape (Shapey's head is round while Block's is more thin); their behaviors are largely the same. For a while, the switch is noticed only by Orel and, as revealed later, by Block's sister Christina, though their attempts to notify their respective families are invariably ignored. In the episode "Numb ", Bloberta finally figures out after going through a family album that Shapey is actually Block. When she goes to the Posabules' house to retrieve him, however, Mrs. Posabule returns Shapey but also abandons Block, forcing Bloberta to take them both and they both bond with each other (like Orel and Christina Posabule ). Clay's obliviousness persists for a while longer; he chalks up the apparition of a second 'Shapey' in his house to his drink and shrugs the matter off. At the end of the episode "Sacrifice", Shapey surprisingly speaks calmly for the first time, telling Bloberta, "Mommy, when I'm thirsty, it feels how I feel when I'm alone", showing that he has grown up from his past self.

In the ending scene of "Honor " it is indicated that they have both grown up into hopefully functional adults, with photographs showing that Shapey has become a police officer and Block a firefighter. It's unknown how their relationships are with their half-siblings. However, given how both Christina and Orel care more about them than their own parents, both probably have somewhat healthy relationships with them. Shapey and Block are both voiced by Tigger Stamatopoulos, the daughter of the show's creator and executive producer Dino Stamatopoulos. More than likely because of his childhood attachment to his mother he will develop a Oedipus complex similar to his adoptive father Clay Puppington.

Shapey's shown being conceived and then born near the middle of the episode. Due to Clay ignoring her and Dr. Potterswheel leaving, Bloberta delivered him all on her own. He was dragged, along with his mother, to a late night sermon arranged by Clay. Even though Bloberta was extremely exhausted from giving birth, she went along.

When the adults of Moralton give Orel bad and confusing advice about God, they mix the boy up into believing that he had to prove he had faith in God. Unfortunately, the story of Abraham and Isaac had been told to the boy who took the story too much to heart.

With encouragement from Orel's peers, the boy was about to do what Abraham did to Isaac. Luckily for Shapey, Arthur Puppington came in time and stopped him before anything bad happened. Shapey was returned to his parents. Bloberta seemed disappointed how Shapey had been in that situation, but says nothing and walks home with Shapey. 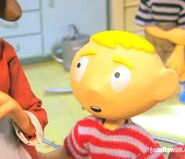 "It feels how I feel when I'm alone" 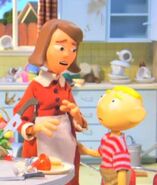 Shapey shocks Bloberta with his words

Talking to one another in their own way 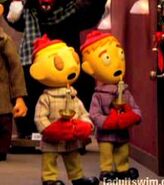 Caroling with Block
Add a photo to this gallery
Retrieved from "https://moralorel.fandom.com/wiki/Shapey_Puppington?oldid=14263"
Community content is available under CC-BY-SA unless otherwise noted.